Skip to content
Home>> Sports>>After tidal wave of NFL coach firings, will there be more openings than good candidates?

When an NFL coaching agent was assessing potential job openings for one of his clients last week, it dawned on him that finding interview opportunities may not be his biggest problem in the league’s January hiring cycle. Instead, the looming issue for his coach might be choosing which meetings to turn down.

That’s a reality that might be showcasing a quandary for NFL teams next month. A lot of openings could exist by the first week of January, so many that there may be too many head coaching jobs and too few high quality candidates.

“If all the head coaches that could get fired do get fired, it’s going to get intense,” the agent said. “There’s just not eight or nine really great candidates out there to put on a list. Usually, teams want to see two or three who have a realistic shot [at a job]. But if you have eight or nine or 10 head coaches fired, that’s a lot of demand. It’s going to get interesting after the best five or six candidates.”

It remains to be seen how many more head coaches could get fired in the NFL next month, but the number of openings could swell to double-digits depending how the last few weeks of the season play out. If that happens, it’s going to push some teams to get creative with options. That is why you’re already hearing the names of some guys who have some dusty NFL resumes, like Bill Cowher and Jim Harbaugh.

“Bill Cowher as a candidate — do you know how long it has been since he was in the league? Seriously, I’m asking,” the agent said. “He hasn’t coached in 14 years. I couldn’t even remember how long when I heard someone bring him up on TV. I had to look it up. At least when people bring up [Jim] Harbaugh, he’s been coaching at Michigan. He was in the NFL inside the last decade. So OK, fine. But Cowher getting brought up for 2021 is just ridiculous. But you’re going to hear the ridiculous if there are 10 openings.”

Ten openings might be a stretch, but it’s not completely out of the realm of possibility. Here’s how that could break down:

The Texans, Lions and Falcons have already fired their head coaches, and none of the respective interim coaches appears to have carved out anything more than an interview once the season is over.

Maybe the only guy who has a realistic shot to convert his interim title into a full-time job is the Falcons’ Raheem Morris, who is 4-4 since taking over. Atlanta faces Tampa Bay twice and also the Kansas City Chiefs in its last three games, and Morris might have to win all three of those to lock down this job. Instead, sources around the league expect him to be a hot defensive coordinator candidate this offseason, possibly to the San Francisco 49ers to reunite with Kyle Shanahan if Robert Saleh departs for a head coaching job.

The Jets are going to fire Adam Gase. There’s no changing that and there’s no need to get deep into why. Everything has gone horribly wrong for Gase and everyone will be better off when the fresh start comes.

There has been chatter of late that Doug Marrone could hang on with the Jaguars, but that would fly in the face of two things the Jags definitely want: A new general manager (who is likely to want his own coach); and a highly drafted rookie quarterback who doesn’t need to worry about experiencing a head coaching change as early as 2022 if Marrone bombs again next season.

As one GM explained about potentially keeping Marrone on, if you keep the current head coach in place for a year, it gives the GM an ability to start a roster turnover with an incumbent suffering through that hardest year, then allowing the GM to move on to his first coaching hire with a roster that is already one season into the renovation process.

Maybe that keeps Marrone around, but that wouldn’t be the case for Anthony Lynn with the Chargers. Los Angeles is expected to keep its GM in place, shifting the lion’s share of blame for this 5-9 season onto Lynn, who might have to win out just to plead his case for one more year. The problem for Lynn is the Chargers already have a very special franchise quarterback in place, and that’s going to lead ownership to look for an offensive-minded head coach who can be paired with him for a long time. Justin Herbert gives the Chargers a chance to survive and build a fan base in the Los Angeles market, and the next head coach will be someone to maximize that opportunity to the fullest.

A few weeks ago, just prior to the Carson Wentz benching with the Eagles, there were some strong indications from inside the organization that Doug Peterson was hanging by the thinnest of threads. It’s unclear if that has changed, but the team’s offense has definitely looked better under rookie quarterback Jalen Hurts. If Hurts plays well down the stretch and the team has life, that’s going to buy Pederson some ammunition to mount an argument that the offensive problems had more to do with Wentz falling apart than Pederson being the root of the issue. What is definitely clear is that Pederson’s camp is going to mount a campaign to change the narrative around him down the stretch, with guys like Brett Favre and other loyal friends trying to tamp down the talk that Pederson is the big problem in Philadelphia.

The Bears’ Matt Nagy, on the other hand, has some other moving parts around him that could all impact his future. None is bigger than the quarterback. If Mitchell Trubisky can put together a competent or even good final three games of the season, that will considerably help Nagy. Three wins would take Chicago out of the running for virtually any of the best quarterbacks in the draft, leaving the team to look at some veteran or trade options to create more competition in 2021. That kind of thing would lean into a “win now” mode, leaving the Bears to possibly take one last look at GM Ryan Pace and Nagy next season, rather than trying to pull off an awkward “fire one but not the other” scenario.

It’s hard to believe Zac Taylor could get the boot in Cincinnati, for a couple of reasons. He still has time left on his current contract and Bengals ownership isn’t big on flushing money to make people go away. Taylor also had some success with Joe Burrow prior to the rookie’s knee injury. Firing the head coach would mean putting Burrow into a schematic reset after only one year. Not ideal.

All of this said, there’s no escaping that Taylor is on his way to one of the worst two-year coaching starts in NFL history, let alone the Bengals franchise. If the team looks like it quit in the remainder of the year, that might get Taylor fired. But with this franchise, it’s still a long shot for a dismissal to happen.

Denver’s Vic Fangio hasn’t exactly lit the Broncos on fire, either. That the Broncos have been largely middling on defense is probably the biggest indictment of Fangio’s performance. The bigger picture is about how Drew Lock finishes 2020. If he closes strong, then Fangio can argue that he was undone by injuries and that he deserves an evaluation with a healthy quarterback. And maybe the team trades for Sam Darnold to create competition at the position with another young veteran.

The danger for Fangio is more steep if Lock crashes and burns down the stretch and the team is suddenly in a territory where it can evaluate another first-round quarterback. If that happens, it’s possible general manager John Elway will care less about the two years left on Fangio’s deal than he does about pairing a top 10 quarterback pick with an offensive coach.

Like Taylor, it seems like this one is less likely a firing than pushing all the chips into 2021.

Taken in its entirety and assuming that some coaches save themselves in the next three weeks, the “likely” number of openings seems to be in the six to eight range. Are 10 openings possible? Sure, but it’s also likely that some of these teams start to play the “but who would we replace him with” game, and come to the conclusion that keeping a known commodity is better than setting an entirely new course on another hire, particularly when that hire may be outside of the elite candidates.

Once you start getting past these familiar names, it’s going to get interesting — in potentially younger or older directions. On the young side, one-year coordinators like Carolina Panthers OC Joe Brady and Los Angeles Rams DC Brandon Staley are going to slide up some lists. And on the flip side, Marvin Lewis landing an interview with the Dallas Cowboys last offseason could keep him in play this offseason. Iowa State’s Matt Campbell should be in play again, as well.

As the coaching agent alluded to last week, franchises will have to make interesting choices as experience or some hot names either come off the board by landing jobs, or remove themselves altogether from consideration from clubs that don’t interest them. Maybe that’s where Harbaugh surfaces, a la Mike McCarthy last offseason. Or maybe the intrigue gets directed toward a positional coach whose name isn’t readily obvious at the moment, as happened with Joe Judge with the New York Giants around one year ago.

What’s clear is that the pandemic season and theoretical “mulligan” year definitely didn’t materialize in the NFL. There will simply be too many openings in January to argue that — but also maybe too few top tier candidates to make it understandable, either. 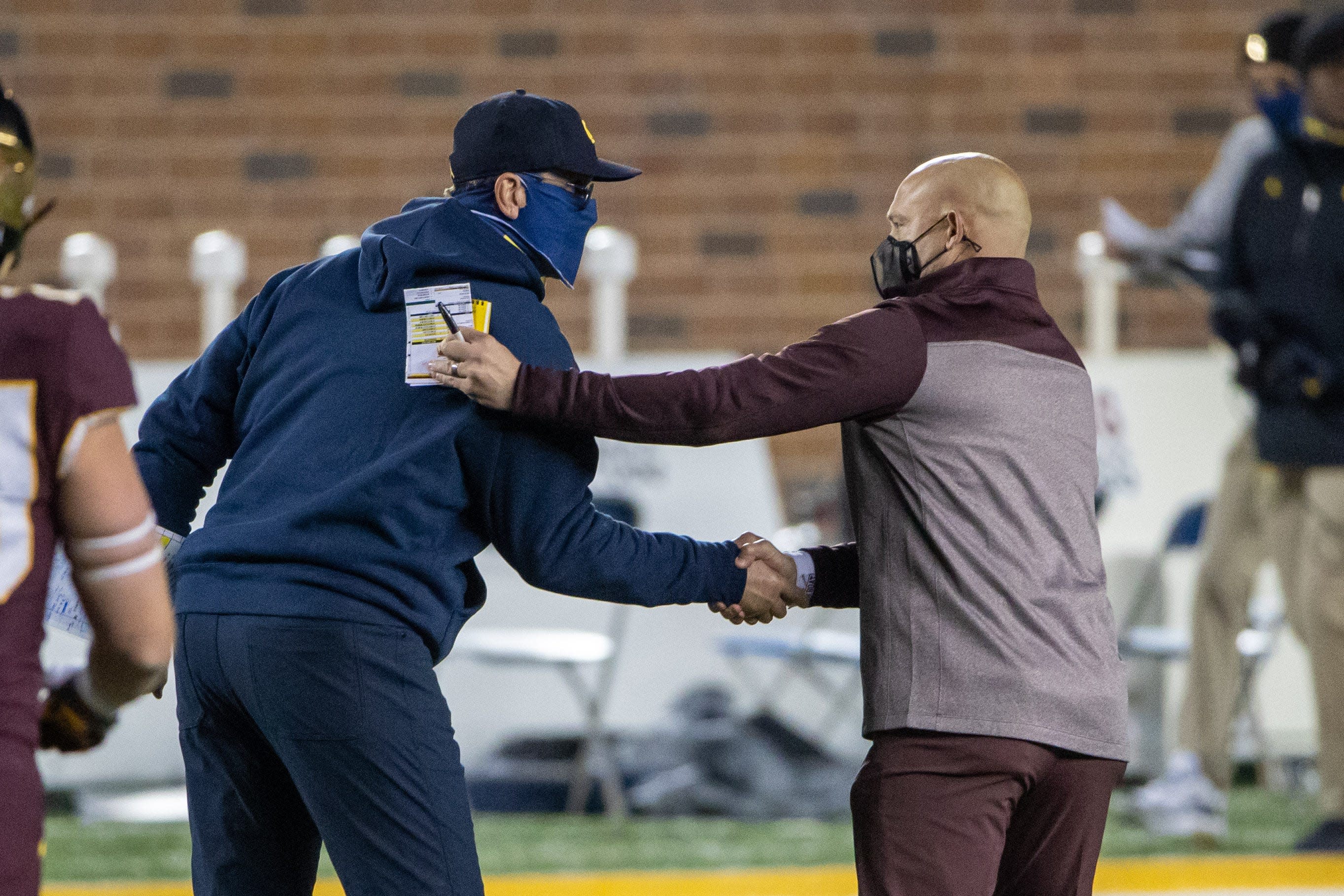