CHARLESTON, S.C. (AP) — Juwan Tyus scored on a 75-yard catch and run on Chattanooga’s first snap of the game and Jay Gibson scored on a 3-yard shovel pass 2-point conversion on the final snap of the game to give the Mocs a 25-24 overtime win over The Citadel on Saturday.

Tyrell Price scored his second touchdown on a four-yard run in overtime before the Mocs elected to go for the win. Drayton Arnold shoveled the ball inside to Gibson on the play that started from the left hashmark.

The dramatic sequence was set up by a pass interference call on the Bulldogs in the end zone on a fourth-and-10 play from the 25.

Chattanooga (2-1, 2-0 Southern Conference) was in control until a fumble and an interception allowed The Citadel to scored 10 points in the fourth quarter.

The tying touchdown, an 11-yard pass from Jaylan Adams to Raleigh Webb on third-and-9, came with 41 seconds left. That came after Adams kept the drive alive on a tightrope 9-yard scramble on the left sideline on a fourth-and-7 from the Chattanooga 21 with 1:38 to play.

Adams finished with 99 yards and two touchdowns, including a 2-yard run on the first possession of OT.

Chattanooga has defeated the Bulldogs (0-6, 0-2), who played four games in the fall, three-straight times by one point. 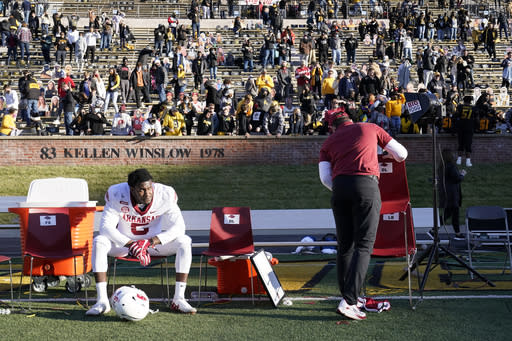