“A few weeks back, that’s all we were going to,” said Dymott. “Covid after Covid after Covid. Then all of a sudden, it just dropped off quite quickly. So [the change is] surprising, but a good surprise.”

Cardiff, in south Wales, has been hit hard by the virus. But during the two days CNN spent with its teams, suspected Covid callouts fell dramatically.

Dymott and Stephens get two: One definite positive middle-aged woman, who isn’t that sick, and another 75-year-old woman, who is waiting for a clearer test result. On Thursday there were only four callouts across all of Cardiff’s 400,000 population.

Wales once had the distinction of being home to some of the worst-hit areas in the United Kingdom, which itself has one of the worst death rates globally.

But last Friday, it had a new focus: Completing its rollout of vaccines to the most vulnerable ahead of schedule — with greater efficiency than the already fast UK. It’s left some wondering if the vaccines might be playing a role — finally — in the drop in elderly patients in need.

One possible Covid call the crew answers is a case in point: Khatun Makani, 75, took a home test that was positive, but had a cold and chest infection that might have made that a false positive, said Dymott.

“I’m shivering and my mouth is very dry,” said Makani, standing just inside her front door. Her frailty is emphasized by the din of a huge family dog locked in another room, and the news that her son, Raheem, a local DJ whom neighbors discuss with affection, died days ago from a heart attack unrelated to Covid. The solitude here is underpinned with intense grief.

Makani said she did not want to go to hospital, and Dymott agreed she may be better off at home, in the care of neighbors she knows. “She’s broken-hearted,” Dymott said.

While Makani is visibly short of breath, she said she had a vaccine shot two weeks earlier, and should be starting to see some protection in the coming days.

This is the new normal for the crew: The elderly and frail patients they would normally rush to treat for Covid have now, here in Wales, mostly had the vaccine. Is this why — over these two days at least — there are suddenly fewer of them?

Wales’s first minister, Mark Drakeford, told CNN he thought the early lockdown he ordered before Christmas — slightly ahead of that imposed in England — was most likely behind any drop in emergency callouts and cases. But he accepted the vaccines might also be beginning to play a role.

“It will have begun to make a difference,” he said. “We know it’s three weeks before the vaccine begins to make a difference and we are only 66 days into our program altogether today. What has really made the difference is the decision we made — the really difficult decision — to go into a lockdown before Christmas.”

While it is too early to determine if the drop in cases that CNN witnessed is connected with social distancing or the vaccines, the UK has recorded a drop in cases nationwide after weeks of nationwide lockdown.

On Sunday, the UK announced it had met its target of vaccinating the 15 million most vulnerable with at least a first shot.

For Dymott, it can’t come fast enough: “That’s all we’ve heard is vaccine … people were calling it the Christmas miracle. So it’s nice to see that it’s actually come into play now and it is having some effect.”

“We really hope there’s not a third wave,” Stephens added. “I think we’re all exhausted now. I hope this vaccine is the answer to get it under control.”

The Welsh Ambulance Service has been hit hard. Frontline workers have daily had to enter houses where Covid infections have been rife; they have lost four colleagues in the pandemic.

And on Sunday, they lost a fourth. Kevin Hughes, 41, from Valley, Anglesey, worked in a computer support role.

For a couple of weeks, back in April, Dymott was concerned she too might die from the virus, when an emergency responder became a patient.

“I had constant nausea, vomiting, headache,” she said. “I didn’t have the persistent cough that everybody says, and I had a high temperature. I was really scared. And I although I kept telling myself, I’m healthy and I’m young-ish, I still kept thinking I could deteriorate at any time now.”

She said she moved to hospital around the eighth day, haunted by the possibility her condition might suddenly worsen. Eventually, she said: “There was a point that I hated it in there so much, that I just thought, ‘I’m getting out of here now.'”

Stephens, an advanced emergency medical technician who has worked alongside Dymott for 12 years — to the extent the pair finish each other’s sentences — said Dymott’s hospitalization caused some panic.

“I was scared, because she had — instead of getting better — taken a turn for the worse.” Stephens said she was unsure if she could have returned to work without Dymott.

Some patients are lodged in the duo’s memories.

Last year, Dymott was urgently called to treat her immediate neighbor. “I went in and I immediately knew she wasn’t well,” she recalled. “It was really, really hard. Because I had to look at her not [just] as a friend … but also how I would look at one of my own patients, and tell her that she really, really needed to go in [to hospital]. She passed away five days later.”

Stephens remembers the all-too-frequent moments at the back of the ambulance, when families say goodbye to their loved ones for what could be the last time.

“I think everybody is well aware … they might not see their family, that person again. You just let them say their goodbyes and then just comfort the patient on the way into hospital as much as you can.”

The team rarely learn the ultimate fate of their patients, but Stephens recalls one woman’s face as she left.

“I possibly think that patient wouldn’t have come back out,” she said. “Other patients who go in, you know they’re very unwell, but you hope they’re going to make a recovery. I think that particular patient probably wouldn’t have.”

Russians are coming, and a Slam win is ‘inevitable’ 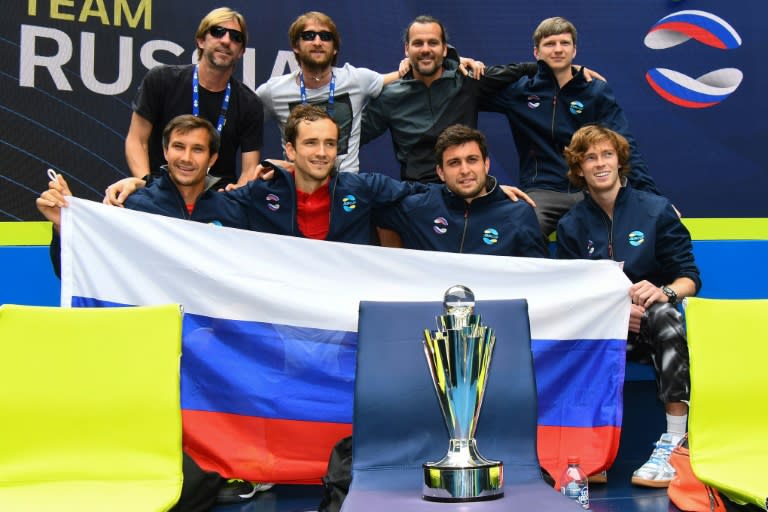 Fighting Patriarchy, and Fearing Worse From the Taliban