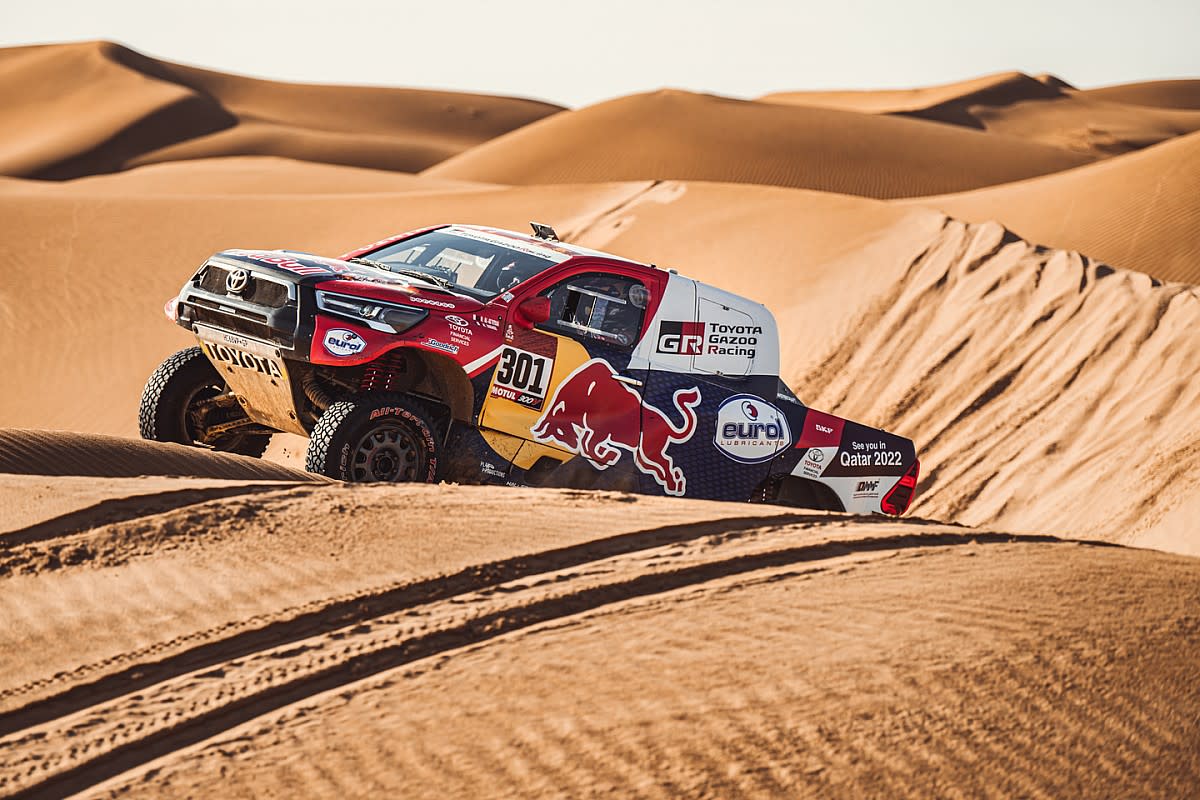 Three-time Dakar champion Al-Attiyah suffered a second successive defeat to the JCW buggies fielded by X-raid Mini in 2021, losing out on the crown by just under 15 minutes to Stephane Peterhansel.

Buggies have now won Dakar five times in the last six years thanks to Peugeot and Mini, with only Al-Attiyah’s triumph in 2019 on a Toyota Hilux 4×4 preventing two-wheel drive cars from securing a clean sweep in the event’s recent history.

The Qatari driver has criticised the rules at several occasions in recent times, and told Motorsport.com earlier this week that he feels the rules are “too much in favour of the buggies” compared to 4×4 vehicles.

Speaking again after Friday’s final stage, a dejected Al-Attiyah suggested that it is impossible for Toyota to beat the Mini buggies unless the organisers bring rules that close the gap between the two vehicle types.

“I can be happy for the job we did,” he told Motorsport.com. “We worked hard with no mistakes from me, my co-pilot or the team. But what can we do? This is the second year that we are fighting, and losing against the buggies. We need to have fair rules.

“No matter how hard we could push, without speed alone we cannot close the gap. The buggies have been winning for five years against the 4×4 cars because rules have been done in their favour. I hope the organisers will change it, otherwise we won’t be interested in coming.

“It is not a question of where the buggy is better and where the 4×4 is better. The rules are not fair, just that. Not only because of the wheels, there are many things. I am not the one who has to change it, but everything is very clear.

“Peugeot won three times, now Mini twice, it is something very strong. We fight with a 4×4, we have many punctures and the buggy is… a buggy, it is not a car from any manufacturer.”

The FIA had limited the top speed for vehicles in the T1 class (which includes both the Toyota Hilux and the Mini buggy) to 180km/hr for 2021 following lobbying from the Japanese manufacturer.

But the buggies still have a slightly wider wheel width, an inflation-deflation system that can be controlled from the cockpit and greater suspension travel than the 4x4s.

Asked where he’d like to see changes in the regulations, Al-Attiyah said: “We need to start from the tyres. Among the three cars of our team, we had 106 punctures. This data speaks for itself. As for the rules, I cannot speak for the team or Toyota, but they are working on it.

“Look at the dimension of the tires (810mm of diameter vs 940mm). The larger sidewall of the 4×4 tyres, which means also a far greater air volume, make them much more tolerant of the stony conditions.”

FIA’s safety director for World Rally Championship Jutta Kleinschmidt, who has been present for the entire duration of Dakar in Saudi Arabia, admitted that the buggies enjoy an advantage over their 4×4 rivals and has assured fixes for 2022.

“We are well aware of the big disadvantage between the 4×4 and the buggies. We also want fair regulations and this topic is already on the table,” Kleinschmidt said.

Asked if the situation could jeopardise Toyota’s future in Dakar as a manufacturer entrant, Overdrive team manager Jean Marc Forti said: “For sure it jeopardises the motivation. This is not the position we want to be.

“There is the will to change the regulations, at least to start with the possibility to have new tyres. The discussion among ASO and FIA should start soon, but I know that B.F. Goodrich already asked them to increase the size of the tyres because they are at the limit in terms of air capacity.”

Cyberpunk 2077: Seven Reasons Why You Should Not Quit

Google Pay Makes Its Return Back to AppStore After Being Removed

David Beckham Comes Home in FIFA 21, Here’s How You Can Get Him

TemTem on PS5 is Pokemon For The Hardcore Crowd