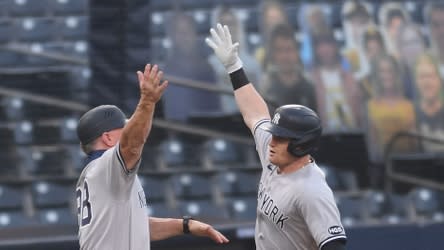 After a breakout 2020 campaign in which he held down multiple outfield positions for injured starters, Clint Frazier heads into spring training this season as Aaron Boone’s starting left fielder. The skipper said so himself in his first news conference down in Tampa.

“I do,” Boone said when asked directly if he thinks Frazier is his left fielder heading into camp. “Clint has obviously come a long way in every aspect of his game, and certainly earned his place last year when obviously nothing was given to him. He had to earn everything really the last couple of years.”

Frazier took advantage of every opportunity at the plate and in the outfield when the likes of Aaron Hicks, Aaron Judge, and Giancarlo Stanton were out for the Yanks in 2020.

Even better was his clear defensive improvement, something that needed change after a rough 2019 campaign that had pitchers wincing at times when the ball was hit his way. He looked more comfortable reading fly balls and had some web gems mixed in as well.

“He’s been a contributor going back really to the first year I was here and last year I think really proved that he was ready to grab an everyday role on this team, especially the improvements really he’s made in every aspect of his game,” Boone explained.

Now that doesn’t mean Frazier will waltz into Opening Day in that role. There are multiple players, including Mike Tauchman and Greg Allen, who will be shooting for a starter role as well. Jay Bruce was also added on a minor league deal after a rough 2020 campaign, as he heads into camp looking for some redemption.

And of course, we can’t forget about a potential reunion with Brett Gardner, who would remain the longest-tenured Yankee in the clubhouse if he were to again sign a short-term deal to remain with the only MLB team he’s played for across his career. Boone addressed that possibility.

“He’s still a free agent. I have not spoken to Brett probably in the last several weeks,” Boone said. “You never know what can happen or transpire. We’ll see. Obviously, he’s been a great Yankee. We’ll see how things unfold here.”

Boone did point out the multiple “proven big-leaguers” like Bruce, Derek Dietrich, Tauchman and Allen already providing some good depth heading into the year. All of these players will be gunning for the spot Boone has already said the 26-year-old Frazier holds.

But it’s about that time for the former fifth overall pick of the 2013 amateur draft to take over as an everyday player. He provides solid at-bats, gets on base, makes plays in the outfield and simply does his job. There’s been hiccups along the way, including ones in the locker room with reporters, but Frazier has put that all behind him.

He’s another young power hitter with unreal bat speed who brings energy and a unique swag to the game – his one-of-a-kind custom cleats speak for themselves.

As long as Frazier can continue to show the Yankees he can perform the way he has been, it should be an easy decision for Boone to put No. 77 in left field on Opening Day.

How to Stop Moths? A Historic Building Tries Bringing in Wasps

Cloud Streaming May Bridge the Gap Between Xbox Generations | COGconnected