Skip to content
Home>> World news>>A Mother, Her Son — and Their 1,500-Mile Search for Home

BOGOTÁ, Colombia — A little boy charges along the highway, his red plastic shoes glowing in the twilight. The suitcase he pulls weighs almost as much as he does. A truck throttles by, threatening to blow him off his feet. But Sebastián Ventura, who at just 6 has already taken on the role of family cheerleader, urges his family on.

“To Venezuela!” he shouts.

His mother, four months pregnant, rushes to keep up. There are hundreds of people on the highway that night, all Venezuelans who had fled their country’s collapse before the pandemic and found refuge in Colombia. Now, after losing their jobs amid the economic crash that followed the virus, they are trying desperately to get back home, where at least they can rely on family.

The global health crisis wrought by the coronavirus has played out most visibly in hospitals and cemeteries, its devastating toll clocked in cases and deaths, its aftermath tracked in lost work and shuttered businesses.

But a second, less visible aspect of the catastrophe has unfolded on the world’s highways, as millions of migrants — Afghans, Ethiopians, Nicaraguans, Ukrainians and others — have lost work in their adopted countries and headed home.

The fortunate ones have found a haven upon return. But many have run out of money along the way, have been rejected at border crossings or have arrived in war-torn countries only to find their past lives burned to the ground.

And so they have kept on moving.

International aid groups have begun to call these people the pandemic’s “stranded migrants” — men, women and children who have been trying to get home since the virus began to spread. The International Organization for Migration said recently there are at least 2.75 million of them.

Among the most affected have been Venezuelans, who even before the pandemic formed one of the largest migration waves in the world. As the oil-rich nation crumbled in the grip of its authoritarian leader, Nicolás Maduro, hunger became widespread and nearly five million people fled.

But when the virus hit, Venezuelans living abroad were often the first to lose jobs in their adopted nations, the first to be evicted from pay-per-day apartments in cities like Lima, Quito, and Bogotá, Colombia’s capital.

In the first months of the pandemic, more than 100,000 Venezuelans left Colombia, according to immigration authorities. Others poured out of neighboring countries.

Over six months, Sebastián and his mother, Jessika Loaiza, traveled more than 1,500 miles, nearly all of it on foot — first from Colombia to Venezuela, and then, unable to find a safe harbor, to Colombia again.

They began their journey in Bogotá in early May, headed to the small home they owned in northern Venezuela.

Jessika, 23, said they had left Venezuela the year before, escaping the violence that had consumed her neighborhood. Local criminals had killed her husband, she said, leaving her a widow at 22.

In Bogotá, she found work at a florist, making bouquets for weddings and parties. She loved it.

Sebastián started school and began to learn to read.

But when the pandemic hit, the shop closed, and she lost her work. They began sleeping on the street.

Jessika didn’t want to leave Colombia. But she hoped that, back home, she could live rent free, rely on government help and outrun the cascading effects of a spreading pandemic.

Pausing on the side of the highway on one of her first nights on the road, her eyes dart toward the growing darkness, then to her son.

She is worried about where they will sleep.

Her family follows. With her and Sebastián is her new partner, Javier; her mother, Peggy; her brother, Jesús; and her sister-in-law, Grelymar, also pregnant.

Cars roar past. Sebastián’s suitcase scrapes the uneven pavement, the soundtrack to his new life.

They have been on the road since dawn, but he is buoyant, racing along the shoulder like a Boy Scout on his first adventure, eager to show off what he knows, to question what he doesn’t.

“This is the place where the train passes,” he says, stopping on a bridge above the tracks, leaning perilously over a ledge, trying to understand where the train comes from — and where it is going.

He knows that they are escaping something bad, he says. “The virus,” he explains, “it kills people.”

They must be headed to something better, he reasons. Right?

Each day, they walk until their feet turn numb, beg for meals, camp on the roadside, hide from the police patrolling for quarantine breakers.

And each night, Jessika scans the horizon for a safe place to sleep — a covered porch, a thicket in the forest — refusing to stop until they find one.

It is June — 32 days and 250 miles since they left — and Jessika’s T-shirt stretches thin over her balloon of a belly. Sebastián is skinnier, browned by the sun.

They are in Bucaramanga, 120 miles from the Venezuelan border. Hundreds of families — all pandemic migrants — crowd the edge of a park, anxious to get home. Smugglers offer rides to the border in exchange for telephones, clothing.

There, Jessika’s mother, Peggy, makes a call and learns that their house in Venezuela has been taken over by the same criminals that ran them out the year before. Peggy begins to cry.

Stuck now between two countries and two lost homes, they decide to press on, handing the money they have left, $30, to a smuggler. When he tells them it’s not enough, Jessika’s brother, Jesús, removes his shoes. He hands those over, then scrambles barefoot into a crowded cargo truck, with the others.

It is after midnight when the truck begins its climb into the mountains. It speeds over a frigid pass. Passengers vomit. At dawn, they pull to a stop by a river, a six-hour walk from the border.

Sebastián stretches his short legs. They are back on the road.

Jessika’s hopes swell as they near the border — her country! — then shatter the moment they cross.

In Venezuela, she learns the government has been using its repressive security apparatus to try to control the virus. In the border town of San Antonio del Táchira, officials corral her and her family into a detention center. They are given coronavirus tests and cots in a tent with 600 others. There, they sleep under military guard for days.

Each morning, Sebastián’s concern is what they will eat. Meal lines are long, and there’s never enough. There are no forks or knives, and so they feed themselves with their identity cards, cutting with the sharp side, spooning with the flat side.

Sebastián’s anxiety hits a fever pitch. He asks his grandmother constantly where they will live, what they will eat and when he can return to his classroom.

On Day 17 of detention, men in white begin calling names of returnees who have tested positive for the virus. “Jesús Loaiza!” one announces. As the men take Uncle Jesús away, Sebastián begins to scream.

The Trouble With Back Home

After a month, the Venezuelan government lets them go. Jesús rejoins the family and they head to Grelymar’s grandmother’s home, with its pink walls and flower-print curtains, in the city of San Felipe.

They soon discover a Venezuela in far worse condition than the one they left. With quarantines in place, jobs are scarce and gasoline is almost impossible to find. Mr. Maduro has consolidated power in recent months; the prospect of a political transition, of any sort of change, feels more distant than ever.

One morning, the refrigerator holds two eggs, a piece of cheese and a bit of rice.

Desperate, Jessika, her partner, Javier, and Sebastián move in with Javier’s mother, on a small farm in the town of Sabaneta — the birthplace of Hugo Chávez, the father of Venezuela’s socialist-inspired revolution. There are 15 of them, including Javier’s brothers, their wives and children.

Sebastián’s legs have turned to sticks. He tries to play with the other children, but breaks away to plead to his mother.

Jessika begins to replay the events of the past few months. All that walking, all those days in the rain, the cold, had amounted to nothing. Venezuela is in free fall.

At least in Colombia there is the chance of a recovery.

Jessika is eight-and-a-half months pregnant. She calls her mother to tell her she is going to walk the 600 miles back to Bogotá.

“With that belly?” her mother says.

It is September. On the road, Sebastián recovers some of his old buoyancy. And once again, the highway is filled with Venezuelans.

The Colombian economy is on edge, coronavirus cases are rising and unemployment has surged. Officially, the border between the two countries is closed. But thousands of Venezuelans are streaming back to Colombia on illegal paths, having seen the conditions at home and hoping against many odds that they will find work in the cities they left behind.

Colombian officials say they expect 80 percent of those who left early in the pandemic to return. When the border reopens, they predict, 200,000 Venezuelans will enter Colombia in the first three months alone.

“What we’re searching for is a future,” says Javier.

They are once again in Bucaramanga, 250 miles from Bogotá, sharing a brick-walled room with a single bed, when Jessika’s water breaks and she begins to bleed. Javier hustles her up a steep hill, to a hospital. After weeks of bravery, Jessika is terrified.

Why is there so much blood? What has all that walking done to her child?

Doctors wheel her into the operating room, and, just after midnight, deliver her baby boy. Josnaiber Xavier Morillo Loaiza is underweight — barely five pounds — but healthy.

Outside the hospital, Javier is worried. They have no home, no jobs, not even money for the alcohol Jessika will need to clean the incision on her belly from the cesarean section.

But Jessika is unwavering. Hours after giving birth, she says she plans to wait until the doctor removes her stitches. “Then I’ll get up and keep on walking.”

Six months after leaving Bogotá, Jessika, Javier and Sebastián step off a bus at the city’s Salitre terminal. The driver, seeing the infant, had given them a ride.

Jessika, just days from her 24th birthday, hugs Josnaiber to her chest. Javier’s bag is so broken that it is held together by string. Sebastián’s shoes are worn nearly through their plastic soles.

But he bounces through the terminal, electrified by their return.

Colombia’s economy has begun to reopen. In the morning, they’ll message the florist, and Jessika will ask for her job back. But that evening, with nowhere else to go, they curl up to sleep under a footbridge, inches from an eight-lane highway, homeless for one more night.

Tao Geoghegan Hart: The plan is to fight for the Grand Tours every year 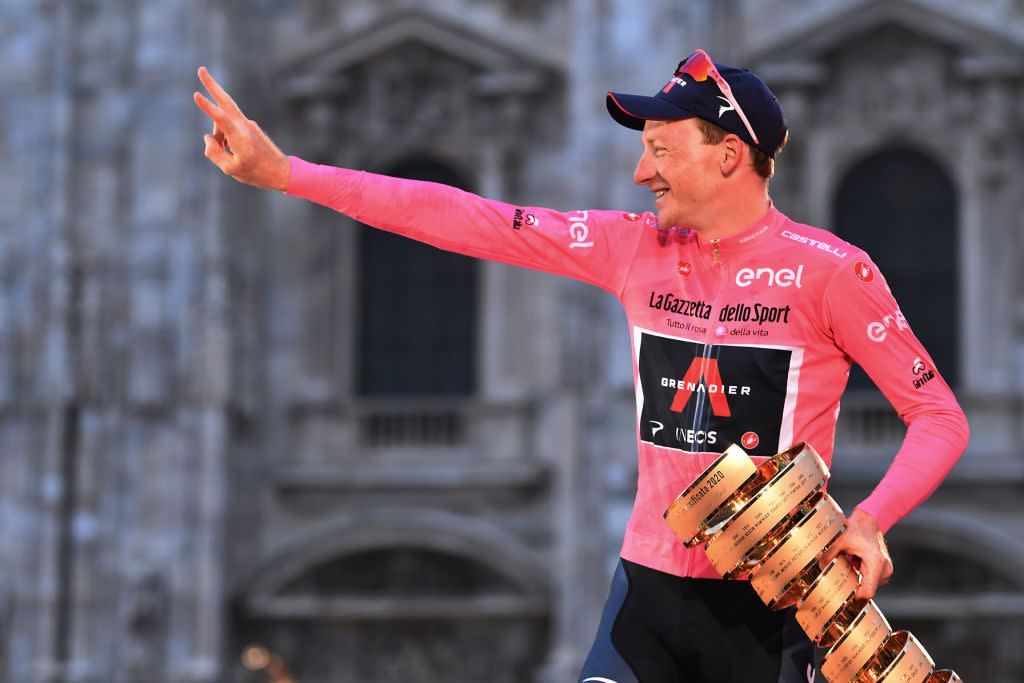 Root wants me in Australia – Anderson

The girl who picked up an AK47 to defend her family