Anesthesia is a hell of drug

Titans receiver A.J. Brown had a Pro Bowl–caliber season despite being hampered by two bad knees that required surgery as soon as the season was over. How do we know? Because Brown went live on Instagram from his hospital bed after the operation.

Brown had surgery on both knees Tuesday, and as he was still coming out of anesthesia decided to open up his phone and start talking to fans. In a clip from the broadcast that circulated on Twitter, Brown can be seen in his hospital gown with a heart rate monitor still on his finger telling viewers, “I’m going to be the best receiver in the NFL.”

Later in the video, after a nurse came by to give him a Coke, he revealed that the injuries had bothered him all season long.

“I was sore all year,” Brown said. “Nobody knew. They told me I was done for the year in like Week 2. I played all year. I ended up making the Pro Bowl. Didn’t know how I was going to do it. I did it.”

(Brown injured the left knee in training camp and the right one in the season opener against the Jaguars, according to ESPN’s Turron Davenport. He missed two games and was limited in practice all season long.)

The nurse also asked Brown who had accompanied him to drive him home. When Brown said it was his dad and the nurse asked if Brown wanted him to come into the recovery room, Brown said no because “he’s going to record me.” That’s smart. Clearly Brown didn’t want to have video evidence of the effects of the anesthesia, and didn’t totally realize that he was broadcasting himself.

Brown was certainly still feeling a little bit of the drugs he was given, and his teammates noticed.

“Boy let me get some of whatever that is that you on,” defensive end Jeffery Simmons wrote in the comments.

“Boy what you on?” receiver Rashard Davis wrote.

Shortly after the broadcast, somebody tweeted from Brown’s account apologizing for letting him stream while “not in his right mind.”

On Wednesday, Brown sent an apology, saying he was “embarrassed” by what happened. He also, unfortunately, blamed the nurse for not taking his phone away.

It’s understandable that Brown, having regained his senses, regrets documenting himself looking silly. But aside from his loopy demeanor, there’s nothing for Brown to be seriously embarrassed about. Of course he wants to be the best receiver in the NFL. What Pro Bowler doesn’t think they’re capable of making that leap? And if he was able to put up 1,075 yards on 70 catches in just 14 games as a second-year player while playing with two bad legs, who’s to say he can’t join the game’s elite? He just needs to stay out of the operating room—for a couple of reasons.

The best of SI

Senator Cory Booker wrote an essay about why he supports NCAA reform. … Philip Rivers will always be remembered for his competitiveness. … The 2018 Packers-Patriots game seemed like the final matchup between Aaron Rodgers and Tom Brady, but here they are again.

Around the sports world

Patrick Mahomes was able to participate in practice Wednesday after suffering a concussion on Sunday. … Former Giants teammates Saquon Barkley and Odell Beckham Jr. are rehabbing their torn ACLs together. … Real Madrid was eliminated from the Copa del Rey by a 10-man side from Spain’s third division. … The NHL has abandoned the microchipped puck it used at the beginning of the season, and Auston Matthews says there was a noticeable difference. … A soccer coach in Zambia was suspended for peeing on the goalpost before a game.

Cole Anthony’s winner at the buzzer was amazing

You know what? Sure.

A convicted bank robber will get a new trial after the New Jersey Supreme Court ruled that prosecutors acted improperly by using a photo of Jack Nicholson in The Shining during the initial trial. … Scientists are making the case for Pablo Escobar’s escaped hippos to be killed. … A NASA rover will land on Mars next month to learn what the planet sounds like.

Email [email protected] with any feedback or follow me on Twitter for approximately one half-decent baseball joke per week. Bookmark this page to see previous editions of Hot Clicks and find the newest edition every day. By popular request I’ve made a Spotify playlist of the music featured here. Visit our Extra Mustard page throughout each day for more offbeat sports stories. 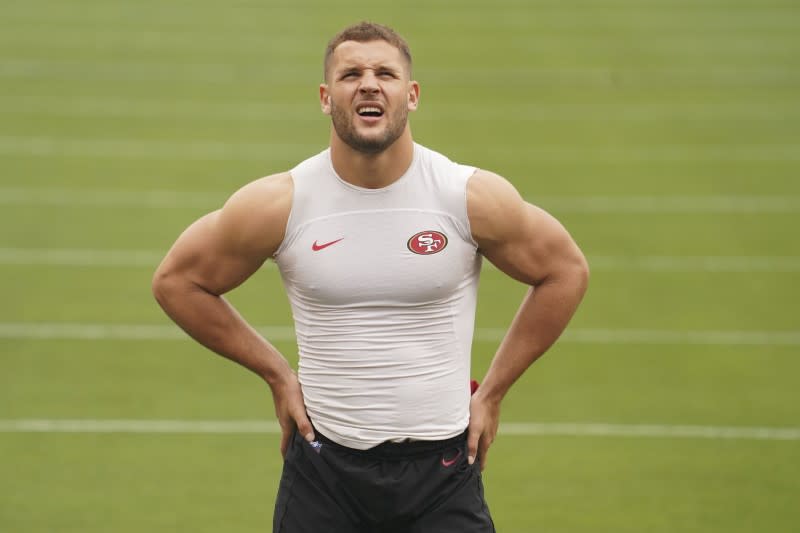