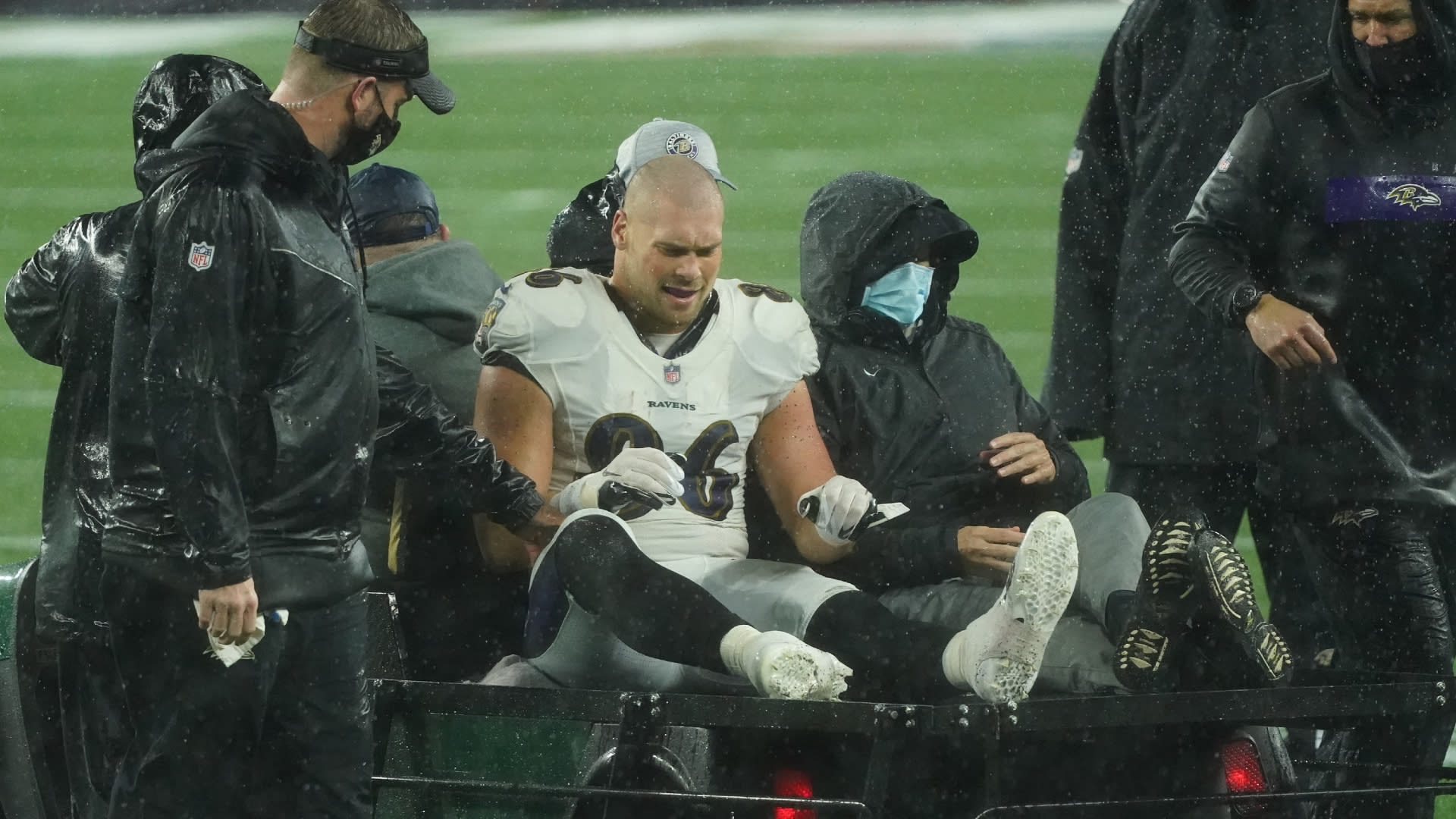 As the Ravens began their final drive of the game with just over a minute to play, Mother Nature, like it had all night, turned against them.

The Ravens needed to go 83 yards in 65 seconds to tie the game, but that became a near impossibility when the howling winds at Gillette Stadium picked up and the rain poured harder than it had all night. After a holding penalty to start the drive, and a drop from J.K. Dobbins to end it, the final score was cemented through the blistering rain: Patriots 23, Ravens 17.

But as the Ravens walked off the field in defeat, they lost more than just a football game. They’re 6-3 and have suffered major, season-ending injuries on both sides of the football. Tight end Nick Boyle is now out for the season with a major knee/leg injury. Defensive tackle Brandon Williams (ankle) and cornerback Terrell Bonds (knee) didn’t return after suffering injuries.

It was just one loss, but their outlook for the future, an outlook that once looked so promising, is now as blurry as the visibility was on their fleeting rain-soaked monstrosity of a final drive.

“Those guys are huge, they’re great players for us, we need them,” quarterback Lamar Jackson said. “They’re starters for a reason. We don’t like to see none of our guys go down. I said it before when (left tackle) Ronnie (Stanley) went down, he’s our brother. To find out he’s (Boyle) out for the season, I don’t even know what to say. (I’m) ticked off.”

Boyle’s injury was certainly the biggest and hardest news of the night, as a gruesome leg injury he suffered in the third quarter will keep him out for the remainder of the season.

He’d drawn praise time and time again for his ability as a blocker in the Ravens’ run-first scheme. Many coaches and players said he was the best blocking tight end in the National Football League. Now, the Ravens have just one healthy tight end (Mark Andrews) on their active roster.

After Boyle’s injury, the Ravens’ offense went on a scoring drive to cut the lead to 23-17 with eight seconds left to play in the third quarter. That was all the offense the Ravens would get.

Even with three forced punts to end the game, the Ravens were outdone on the ground by quarterback Cam Newton, running back Damien Harris and the Patriots’ offensive line.

Without Calais Campbell, and later Williams, the Patriots had their way on the ground for the first three quarters of the game. They finished with 173 yards on the ground, 121 of which came from Harris. Decimated by injury, the Ravens were manhandled along the defensive front for a majority of Sunday night.

“There isn’t an excuse,” outside linebacker Matthew Judon said. “Whoever is in the game needs to play to a standard. When we let up that many rushing yards from a team, that’s unacceptable. We’re going to get on film and get it fixed. If a team runs the ball like that, you usually lose.”

Newton threw for just 118 yards on 13-of-17 passing, but it didn’t quite matter when there were rushing lanes on nearly every play. And as the Patriots got rolling on the ground game, the injuries piled up.

In addition to the injuries the Ravens suffered during the game, Derek Wolfe and Marlon Humphrey were each shown on camera shaken up a bit at one point during the game. Both finished the game.

Despite the bruised Baltimore defense, they shutdown New England in the fourth quarter enough to give Jackson and the offense enough time to put together an improbable win on the road.

Instead, the Ravens gained 33 yards on 13 plays in the fourth quarter.

“We’re ticked off,” Jackson said. “Don’t nobody like losing. None of you guys would like losing, especially when we know we’ve got a lot of talent on our team. We’ve got to regroup. Watch film on our opponent and build from there.”

The questions for the Ravens entering Sunday’s game were plentiful, as they didn’t look as sharp as they could be, or wanted to be, on the offensive side of the ball. The defense was sturdy, but questions about the secondary’s depth absent Jimmy Smith, Tavon Young, Iman Marshall and Khalil Dorsey persisted.

Now, there’s a whole crop of new issues facing this team that could turn out to be insurmountable.

The Ravens will need at least one more tight end on the active roster after Boyle’s injury. D.J. Fluker, who started at right tackle, was replaced by Patrick Mekari midway through the game which left that spot as a question mark moving forward. Although Newton attempted just 17 times, the Ravens had just one sack and three quarterback hits as the pass rush didn’t get home enough. The defensive line is suddenly decimated by injury, as is the cornerback room.

Next week, the Ravens will host the Titans and the NFL’s leading rusher, Derrick Henry. They could be without Campbell, Williams and the like once again, too.

“We’re going to fight,” Judon said. “It doesn’t matter who we have in there. It doesn’t matter who we’re playing. We’re going to continue to fight and put our best effort forward. We have seven games left, and our record is what our record is. If we want to change it, we have to change it in the locker room, and it starts probably on the plane — watching this film, being critical of ourselves and being real with ourselves.”

The common refrain in the postgame press conferences was a simple one: The team is still 6-3 and poised to make a playoff run, even without Stanley and Boyle in the mix. Simply, it’s just one loss.

“A lot of guys got to step up,” Snead said. “We’re gonna find out about ourselves, find out about the mold of this team offense and defense. I think a lot of guys that are going to have to step up will step up, and they can make an impact on this team, whoever that may be. We’ve got a lot of injuries, those are uncontrollable, part of the game, whoever that next guy is to step in there and help our team, we’re going to trust them and move forward.”

But how many, and which, healthy bodies they’ll have to move forward is the biggest question facing the Ravens.

And as the Ravens leave Boston and head for Baltimore, they’ll head through the rain and wind once again, en route for a final seven games with a future as uncertain as the blustery conditions that symbolized their hellacious night against Bill Belichick and the Patriots.

Koeman Acknowledges Barcelona ‘Not the Top Favorite’ in UCL 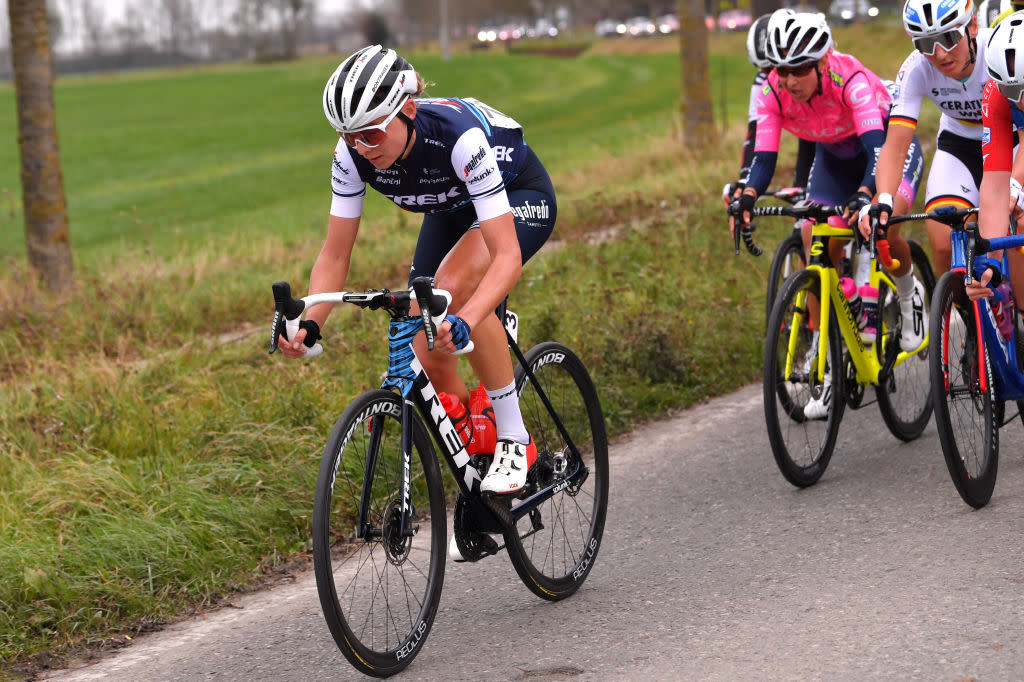 Suresh Raina’s Exit From IPL 2020 Could Mark The End Of His Tenure With CSK: Report | Cricket News