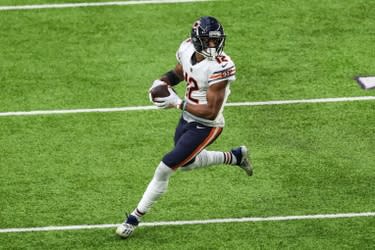 Despite John Mara and Dave Gettleman saying that progress was made this season, the Giants still finished 6-10 and Gettleman knows roster changes need to be made. As he mentioned in his end of season news conference, the uncertainty of the cap is keeping teams from truly making an offseason plan.

But work can still be done in evaluating some free agents set to hit the market in March. Here are some players who played this weekend that should intrigue the Giants:

Gettleman mentioned the Giants needing some more playmakers for Daniel Jones, and it was apparent this season when no one really stood out as the team’s No. 1 receiver. Sterling Shepard had a great end to the season, but since Odell Beckham Jr. was traded, he hasn’t assumed that top role.

With Chicago, Robinson has done just that and could do the same for the Giants. Even through all the flip flopping of Bears quarterbacks this season, Robinson hauled in 102 catches for 1,250 yards and six touchdowns during the regular season.

At 6-foot-2, 220 pounds, the Penn State product has shown a diverse route tree with a wide catch radius and reliable hands. And that’s why he should be getting a pretty hefty bag to whoever is the highest bidder. In today’s contest, Mitch Trubisky will be the signal caller and loves to look Robinson’s way, so his talents should be on display for all to see.

The Giants will certainly be in the edge rusher market this offseason and there’s a few studs to choose from in that area. Two of them play on the same team in Baltimore.

Judon has been wreaking havoc for the Ravens all season long, while Ngakoue was traded for at the NFL deadline to bolster Baltimore’s already scary bunch up front. Ngakoue has eight total sacks between the Ravens and Vikings this season, while Judon has totaled six and nine tackles for loss.

One would think that the Ravens will be aggressive in signing Ngakoue because draft capital was given up. Of course, the Jets could give the 25-year-old a price he can’t refuse. But Judon will also have a solid market, as he is only 28 years old and always shows a high motor when he steps on the turf.

Another receiver option, Davis is sometimes overshadowed by one of the best deep ball threats in the game, AJ Brown. But 2017’s fifth overall pick secured 65 receptions for 984 yards and five touchdowns in his best NFL season to date.

The Titans declined his fifth-year option, as they wanted to see if Davis could provide more for the offense after mediocre numbers in 2019. He answered that call, but maybe the Titans’ wavering faith in him could result in testing the market. Turning just 26 this Monday, Davis’ speed and room for more growth is intriguing, and should be for the Jets.

He is questionable for this game against the Browns with a knee injury, but either way, Smith-Schuster is bound to be a top name as well in this vast market.

He hasn’t been able to replicate – or even come close to – his sophomore season that saw 1,426 yards and seven touchdowns. But a respectable 831 yards and nine touchdowns on a team that has a myriad of receiving options that Ben Roethlisberger uses is good numbers.

Whether or not Smith-Schuster is a No. 1 receiver is the main question here, as it is with Davis too. Still, he’s only 25 next season and has shown he can play like a Pro Bowler.

For a former special teams coordinator, the thought of adding Patterson to your roster must make you smile. Joe Judge knows the value that special teams brings to a team, and Patterson has been one of the best all-time at returning kicks and punts.

Kick returns weren’t the best for the Giants this season. Dion Lewis and Corey Ballentine are far from the best options to use in those scenarios. Patterson just has a knack for it, and he will be employed because of it.

If it makes sense, expect the Giants to be in the running for someone who could up the return game significantly.

What to expect at the first ever all-digital CES 2021

Lamar Jackson has most to gain these playoffs, as Ravens take on Bills on Yahoo Sports app