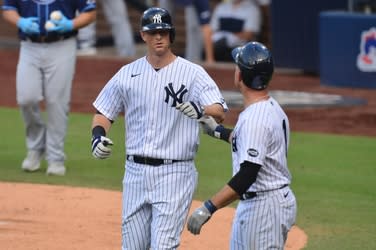 INF DJ LeMahieu and C Erik Kratz made for the two position players while a pair of pitchers, left-hander James Paxton and right-hander Masahiro Tanaka, also were declared free agents in a release by the MLB Players Association.

The Yankees quartet was among a total of 147 MLB players to do so.

Chief among the contingent of Yankees is LeMahieu, who marks a top offseason priority for GM Brian Cashman after a career-best two-year run with the franchise.

LeMahieu, whom Cashman signed in January 2019 to a two-year contract for $24 million after he debuted with his initial eight MLB seasons on the Chicago Cubs (2011) and Colorado Rockies (2012-18), did not disappoint.

In addition to serving as a utility player from second, first and third, LeMahieu’s bat carried the Yankees at times.

Along with LeMahieu before the 2019 season, Cashman acquired Paxton in a November 2018 trade that sent three prospects — including a top one, LHP Justus Sheffield — to the Seattle Mariners. Paxton, who turns 32 on Nov. 6, produced a mixed batch of results in two seasons from 2019-20 — 16-7 with a 4.16 ERA and 212 strikeouts to 62 walks through the combined 171 innings over 34 starts.

Tanaka, who turns 32 on Nov. 1, spent all seven of his first MLB seasons as a Yankees starter from 2014-20. A two-time All-Star selection, he had his ups and downs.

U.S. to Establish Embassy in the Maldives