Here are 10 takeaways from the Toronto Raptors’ 107-102 win over the Indiana Pacers.

One — Tenacious: Kyle Lowry said earlier in the season that the Raptors had lost their swagger. Well, this is what that swagger looks like. This is the hustle and fight that the 2019 champions embodied over the last two seasons, and it willed the Raptors to victory despite Lowry (toe) and Pascal Siakam (knee) both sitting due to injuries. The Pacers weren’t at full-strength either, but they are still one of the best teams in the East, and the Raptors were up to the challenge. This is their best win of the season to date, and the Raptors are now 5-1 since starting the year at 2-8.

Two — Clamps: The Raptors have the capability to defend at an elite level, and it was on display both in limiting Miami to 81 points and again in this win where the Raptors collected two clutch stops to seal the victory. First, it was Fred VanVleet locking down Malcolm Brogdon to preserve the one-point lead, where the Raptors did a great job of denying all other options, which then forced Brodgon into an isolation, and VanVleet got all ball to force Brogdon into a shot-clock violation. On the next trip down, the Pacers tried to get a quick two through Domantas Sabonis, except Chris Boucher rotated over for an impressive block, then Stanley Johnson followed to deny Sabonis on the putback, before VanVleet corralled the miss to ice the game. That was the game in a nutshell: Indiana just had nowhere to go offensively.

Three — Smothered: The key characteristic of a Nick Nurse defense is to focus on shutting down the opposing team’s best players and force less talented players into deciding the game. That’s exactly what happened with Sabonis (1-for-10) and Brodgon (5-of-22). The pick-and-roll combination between Sabonis and Brodgon, and the post-up with Sabonis function as tentpoles of Indiana’s offense, and the Raptors cut them down at the source. Sabonis saw constant double teams in the post, and enough pressure to the point where Sabonis had to back out and reset rather than finding the open man as he usually can. In the pick-and-roll, the Raptors were diligent in forcing Brodgon away from the screen, getting him to go right instead of attacking left, and with plenty of help arriving at the rim to pressure the shot. The Raptors couldn’t have executed their strategy any better than they did today.

Four — Versatile: Fresh off wrestling with Bam Adebayo in the Heat series, Anunoby’s next assignment was to grapple with an even bigger player in Sabonis. Aron Baynes started on both centers, and is slowly coming around of late, but Baynes is still limited and Anunoby is regularly logging time as the de facto center. Anunoby’s among the strongest wing players in the league, with tree trunks for legs an upper body to match, and his 7-foot-3 wingspan scales high enough to contest most shots. Given the way the league is downsizing, with traditional centers being rare, it wouldn’t be a stretch to imagine Anunoby’s future as a smallball five. If All-Stars like Adebayo and Sabonis can’t beat him, that means Anunoby is the mismatch.

Five — Strong: Anunoby also carried the Raptors offensively with his first 30-point game of the season. Anunoby continues to be red-hot from three, and his sometimes erratic free-throw shooting held up in pressure moments. But the most impressive aspect of his performance was Anunoby’s ability to drive to the basket. Anunoby can appear clumsy at times when driving against players of at his own position because they “flop a lot” against him (his words, not mine) but that strength becomes an asset when he attacks bigger players. Four times tonight Anunoby drove straight at Sabonis, once resulting in a foul, and three other times he was able to pop Sabonis out of position using his shoulder to create space for a layup. It’s almost counter-intuitive for a player to have more success in the post against bigger defenders, but Anunoby seems to have the advantage.

Six — Cool: After trailing by double digits for much of the game, the Pacers drew even thanks to the pesky play of reserve guard T.J. McConnell, who consistently found gaps in the Raptors’ defense by driving in and kicking it out. The Raptors’ second unit coughed up the lead, allowing an 8-0 run in under two minutes, and the Pacers seemed to have all the momentum. Nurse wisely brought his starters back in early, and that allowed the Raptors to edge back ahead. Norman Powell got inside for a layup, and VanVleet drilled a pull-up three in transition to force the Pacers into a timeout with another eight-point deficit. Without Lowry and Siakam to break the defense, it was up to Powell and VanVleet to generate offense, and they were up to the challenge.

Seven — Exhausted: Yuta Watanabe admitted after the game that he was really tired, which is the mark of a good game from him. Watanabe was everywhere defensively, flying around on the closeouts, battling for every rebound, rotating onto players of every position, while also sprinting out in transition. Watanabe’s shots haven’t dropped yet, but he’s getting to the right spots and the chances are quality. If that comes around, it’s going to be hard for Nurse to keep Watanabe on the bench. His energy seems to be infectious, and he is always the hardest competitor in the rotation right along with Johnson.

Eight — Useful: Nurse started Johnson in place of Siakam, but more importantly, Nurse finished the game with Johnson as well. Part of that comes down to injuries, although this is also becoming a pattern. Johnson finished the game in Portland, and he forced two airballs in one of the Raptors’ wins over Charlotte, and Johnson was pivotal in today’s effort as well. Johnson is similar to Anunoby (so similar that the two joke about being twins) and he is also able to guard all five positions. The hesitation with Johnson is that he’s not being guarded defensively, but he’s making great reads to counter. Johnson collected four assists, although his best pass came in the fourth quarter where he drove into the teeth of the defense before throwing a bullet of a kickout pass to Powell in the corner, who swung it to Anunoby for a wide-open look. Johnson might be a fifth option offensively but there is enough in his toolbox to contribute so long as he cuts down on his turnovers.

Nine — Benched: Terence Davis can’t get out of his own way. First it was committing five fouls against the Hornets, then it was five turnovers to the Heat. Today, he throws a lazy pass right away after checking in and commits a foul before getting benched for the night. Nurse went to DeAndre’ Bembry in his spot, and while Bembry doesn’t provide the scoring that Davis can, you also don’t notice Bembry because he isn’t making mistake after mistake. Nurse is still showing faith in Davis, and said post-game that he wanted to get him back after he settled down. Hopefully, Davis can reward his coach’s faith with sounder decisions. Nurse is not exactly charitable with his chances.

Ten — Rush: Malachi Flynn looks very much like a rookie guard who sees inconsistent minutes. Flynn made a nice dish for an assist to Boucher at the basket and got inside for an and-one, but Flynn needs to have a better game plan when he is asked to create. Flynn seems pre-determined in his moves, and he’s attacking too fast at times when he doesn’t need to, and it’s leading to him slipping and in need of a bailout. The size and speed of the professional game is a huge step up from college, and Flynn could use an extended run in the G-League once that’s set up to acclimate. The talent and ability peaks through, but the majority of his time is erratic.

As Protests Shake Russia, Kremlin Drops Its ‘Navalny Who?’ Tack

NFL Betting Week 7 Lookahead – Which Lines Are “On The Move?”

How to Watch Man United vs. Liverpool 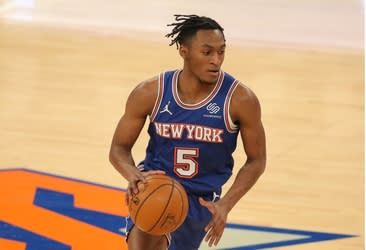