IIoT (Industrial Internet of Things) or Industry 4.0 is changing the landscape of the manufacturing industry in India. While technologies such as robotics, AI, ML, cloud computing and big data analytics exist in the manufacturing sector, their integration with one another will transform the way we do business, says Rajeev Sharma, Chief Strategy Officer, Mitsubishi Electric India Pvt. Ltd.

How has the Covid crisis affected the Indian semiconductor industry? What will the New Normal look like in the 2020s?

COVID-19 has significantly altered the fundamentals of the sector, including customer behaviour, business revenues, and numerous aspects of corporate operations. Mitsubishi Electric is channelizing and strategizing the business development activities to fit in the new normal and targeting it in three phases i.e. immediate, mid-term and long-term phases in India. In immediate business opportunities, we will continue to focus on traction, utility solar, solar power, and consumer durables. For the mid-term phase, we are channelizing our best efforts in getting the design for emerging segments of EV Charger, EV Traction and Medical. For the long term, along with the growth of the above-mentioned segment, we are looking forward to contributing in High Voltage Direct Current (HVDC) and Space for High Frequency (HF) & Optical Devices (OPTO). On the Product side, our regular checks and development will be on Dual-in-line packaged intelligent power module (DIPIPM), Industrial Insulated Gate Bipolar Transistor (IGBT), and most importantly, X Series High Voltage- Industrial Insulated Gate Bipolar Transistor (HVIGBT) for various Applications. In parallel to existing Silicon (Si) power devices, we have also started offering new, improved performance Silicon Carbide (SiC) Power devices to customers.

How is SPECS helping? What more needs to be done to have Make in India a success in this field and for India to dominate globally?

Scheme for Promotion of Manufacturing of Electronic Components and Semiconductors (SPECS) introduced in April 2020, is aimed to offer monetary stimulus of 25% of capital expenditure for the manufacturing of goods that form the supply chain of electronic goods. This is a welcome step from the government and will help in strengthening the Make in India initiative.

The question of whether India can build and sustain its semiconductor fabrication facility will probably take some time due to current conditions. The level of investment and the infrastructure required. However, there may be progress toward a viable homegrown development, if the planners focus on older process technologies rather than manufacturing at the bleeding edge. Also, a very significant focus from government directly on initiatives like Make in India, invest in India, and Design in India is giving a major push to the various companies.

What about the rise of factory automation systems and their role in Industry 4.0?

IIoT or Industry 4.0 is changing the landscape of the manufacturing industry in India. While technologies such as robotics, AI, ML, cloud computing and big data analytics exist in the manufacturing sector, their integration with one another will transform the way we do business. In India, IIoT is still in the early stages, but it is already transforming the manufacturing sector in terms of responsiveness to customer needs, better transparency, agility, and cost savings.

At Mitsubishi Electric, we call it [email protected]–a smart manufacturing solution that utilizes cutting-edge Factory Automation products based on its high-speed networking technologies like CC-Link IE and CC-Link IE TSN to visualize information and coordinate with high-level Manufacturing Execution Systems (MES), to improve productivity, while reducing Total Cost of Ownership (TCO). It enables rapid Digital Transformation of the manufacturing industry by integration of IT & FA/OT systems. For this, all our FA Products like PLCs, HMIs, Inverters, AC Servo Systems, NC Controllers, Industrial Robots, IPCs and Low Voltage Switchgear are equipped with advanced technologies for communication. [email protected] offers greater visibility of the production processes. Factory Automation is becoming more and more digital with the advent of smart manufacturing and the fact that India is a preferred manufacturing hub, it becomes imperative to increase competitiveness and build an efficient value chain.

You have launched a series of collaborative robots in India. What will be their role in the New Normal where no touch technologies will rule?

We recently launched the MELFA ASSISTA series of collaborative robots in India intending to bring efficiency and increasing production with optimal financial and physical input. It will also be helpful for the industrial units to meet the world’s new requirements. MELFA ASSISTA Collaborative Robot can support the industry with easy programming, fast set-up, flexible automation in comparison with industrial robots and ensure collaborative efforts with human interaction, while all the while maintaining high standards of safety.

The work in the new normal will be done cohesively between humans and robots, as human intervention is required to monitor the work done by robots and achieve increased efficiency.

What about your R&D ecosystem in India? Is India finally ready to become a big IT power in the R&D space?

R&D is a very capital-intensive activity and needs time. The challenge with India in the past was that companies did not have the luxury of capital or time to support R&D because of which we have been followers in most fields, not innovators. However, in the new IT age, things are gradually changing, and Indian companies are playing a big role here. There are a lot of new research and development activities happening across sectors and we will reap benefits in the longer run. I am sure India will evolve as a challenger in the R&D space in the near future.

Will the role of Artificial Intelligence increase in all of the above. How have you implemented AI solutions so far?

Mitsubishi Electric has been a company where Innovation is a part of our core strategy. Our efforts are always ongoing. We’re proud to be ranked No.2 globally and No.1 among Japanese firms for international patent applications filed in 2019 by the World Intellectual Property Organization (WIPO).

A) Mitsubishi Electric has developed ClariSense integrated Internet of Things (IoT) technology, which will be used for accelerated development of IoT systems construction within the company and its group companies. ClariSense, which synthesizes Mitsubishi Electric’s Maisart®* artificial intelligence (AI) technology, security technologies and other strengths as a general electrical equipment manufacturer, is a unified design guideline and solution library in the form of IoT system that can be centrally maintained and expanded.

B) Mitsubishi Electric has recently developed a cooperative AI technology that can enhance work collaboration between humans and machines. The system uses “inverse reinforcement learning”, or IRL, to learn and imitate the actions of skilled workers. IRL, one of the key features of Mitsubishi Electric’s “Maisart AI” technology, which enables machines to imitate human-like actions based on relatively small amounts of data. Eventually, the technology is expected to be used in autonomous driving vehicles and other applications.

C) Mitsubishi Electric has also developed what it believes to be the world’s first technology capable of highly natural and intuitive interaction with humans based on a scene-aware capability to translate multimodal sensing information into natural language by using Mitsubishi Electric’s proprietary Maisart compact AI technology. Scene-Aware Interaction technology is expected to have wide applicability, including human-machine interfaces for in-vehicle infotainment, interaction with robots in building and factory automation systems, systems that monitor the health and well-being of people, surveillance systems that interpret complex scenes for humans and encourage social distancing, support for touchless operation of equipment in public areas, and much more.

D) Mitsubishi Electric has also developed the world’s first diagnostic technology based on the company’s proprietary Maisart AI technology that uses machine learning to analyze sensor data and then generates a model of a production machine’s transition between various operational states, thereby enabling the technology to detect machine abnormalities rapidly and accurately for improved productivity in factories and plants.

E) We have also developed the aeration control technology to reduce the electric power consumption for supplying air (aeration) to biological reactors which is essential for biological wastewater treatment. By leveraging the company’s Maisart AI technologies, the system accurately predicts the quality (ammonia concentration) of the water flowing into the reactor over in few hours.

Going forward, Mitsubishi Electric will continue to develop its new cooperative AI for eventual application in commercial facilities. The envisioned benefits include improved operational efficiency, enabling workers to maintain social distancing and allowing machines and humans to operate alongside each other safely in settings such as factory production lines and logistics warehouses as well as in applications for autonomous-driving vehicles. 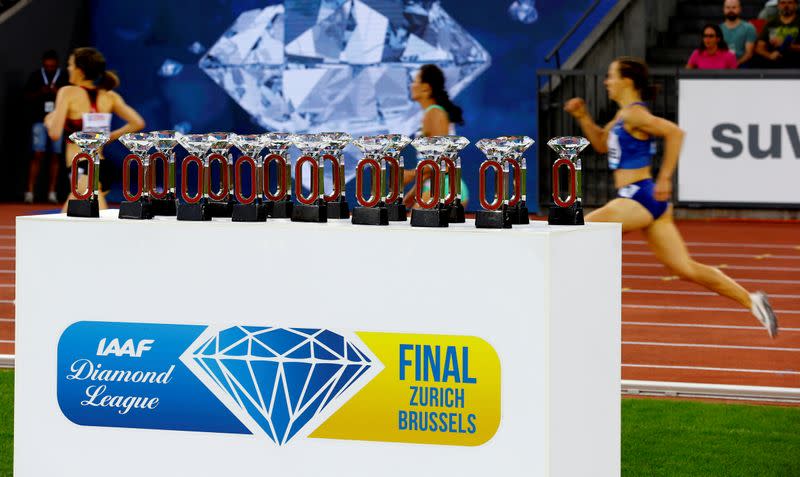 Diamond League to have full programme of 32 disciplines in 2021