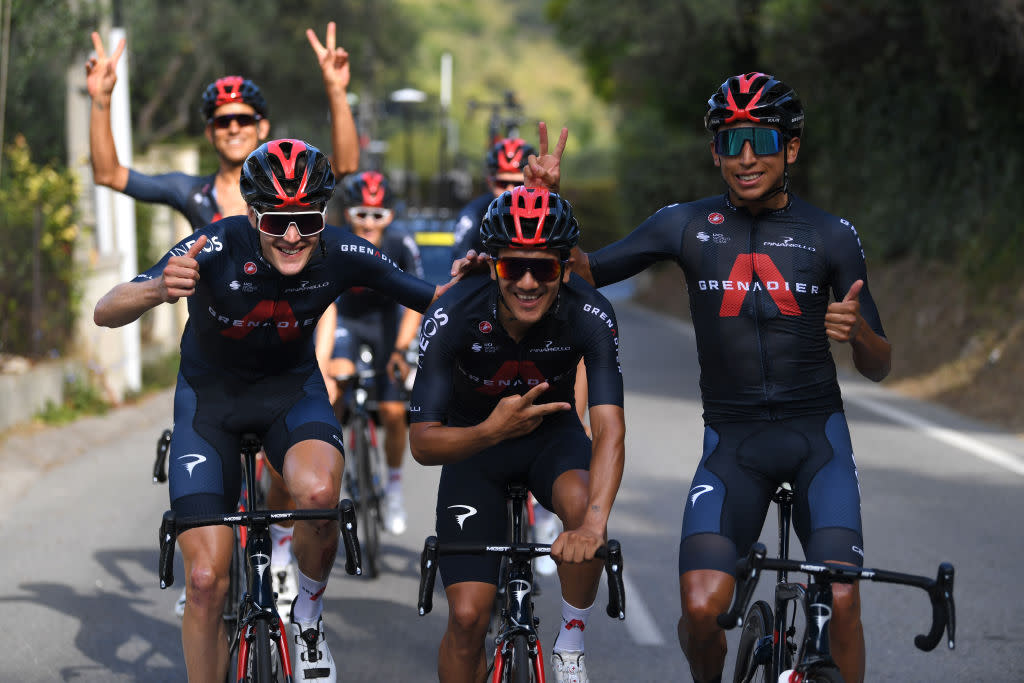 Heading into their second full season under Jim Ratcliffe’s ownership, Ineos Grenadiers have amassed arguably their strongest ever line-up ahead of the 2021 season.

Out has gone Chris Froome, while a raft of stage-racing talent has been signed. The exciting prospect that is Tom Pidcock finally moves into the WorldTour, while Egan Bernal, Richard Carapaz and a host of other names will compete for Grand Tour contention.

While most teams can divide their seasons into two distinct phases of pre- and post-COVID-19 lockdown, the simplest break in Ineos’ campaign can be measured before and after the Giro d’Italia. Until the Italian Grand Tour, the British team had disappointed in several key races, including the Tour de France, where they failed to contest for the maillot jaune and their once great hope, Egan Bernal, abandoned with a back injury.

The Classics were a familiar let down and the team only managed three WorldTour wins before October. The headlines during the summer were dominated with speculation over Chris Froome’s eventual departure, while their Tour de France selection process highlighted both the team’s need for transition towards a younger generation and their ruthlessness when dealing with Froome and Geraint Thomas.

The Giro results put a much-needed gloss on the campaign, with Tao Geoghegan Hart becoming just the second British winner of the race thanks to a stunning turn of events in the final week. As a unit, Ineos bossed the race, picking up seven stage wins with a drive that demonstrated both their depth of talent and their next crop of leaders.

Overall, 2020 was a season of change for the British team, and while they underperformed in a number of aspects, they deserve credit in the way that they bounced back to rescue the year.

It’s also worth remembering that the team went almost the entire year without Nicolas Portal, who tragically died in March. He was an integral part of almost every aspect within the team, and while the rest of the management diligently shared some of the late Frenchman’s practical duties, nothing really made up for his dynamism or ability to mentor the riders through challenging scenarios. He left a huge hole, both physically and emotionally, and the sport of cycling, not just Ineos, is worse off without him.

Egan Bernal: Twelve months ago, Bernal was seen as the future of stage racing after a Tour win that showcased both his class in the mountains and an ability to handle the pressure. A year on, and the fickle fanfare has moved to Tadej Pogačar’s side to declare him the next ‘rider of a generation’.

However only a fool would write Bernal off. Still just 23, he is one of only a handful of riders who can legitimately call themselves a Grand Tour contender. If he can fix his ailing back, then he has every chance of leading the line for Dave Brailsford’s team next season.

There are hurdles to overcome – there always are – but the Colombian is still the best pound-for-pound stage-racer on the team. A below par 2020 and a winter of reflection and recovery could be all that’s needed for Bernal to bounce back. For neutral spectators of the sport, the idea of Pogačar, a revenge-seeking Primož Roglič and a fit-again Bernal going toe-to-toe at the 2021 Tour is a mouthwatering prospect.

Richard Carapaz: Nipping at Bernal’s heels in the Ineos pecking order is Carapaz, who brought a breath of fresh air to the team during a testing period. The 2019 Giro winner was thrown into the Tour de France at the last minute, almost came away with a stage win and the mountains jersey. He then doubled up with a fine second place overall at the Vuelta a España. Just don’t mention the bonus seconds.

There’s a genuine sense that the former Movistar man rides without ego or envy, while his character and willingness to work for the collective shines through in the way that he rides. He is a leader that inspires respect rather than demands it, but there’s also a quiet confidence within him, and he can head into the winter training camps with a strong argument that 2021 is his chance to target the Tour.

Tao Geoghegan Hart: It might seem counter-intuitive, but winning the Giro d’Italia could conceivably move the British rider away from making his long-awaited Tour debut, rather than edge him closer. Speculation is already mounting that he will return to the Giro anyway next year, alongside fellow breakout star Filippo Ganna, and that makes sense to a degree.

The London-born star has never appeared to rush into challenges, even putting his WorldTour debut on hold so that he could learn for another season in the under-23 ranks, and that level-headed approach might be utilised once more.

Heading to the Tour with a team containing Bernal, potentially Carapaz, Thomas and possibly Pavel Sivakov might dent Geoghegan Hart’s leadership challenge, but going to the Giro might provide a clearer path to team leadership. Either way, whether he rides the Tour or the Giro, the 25-year-old appears to be the real deal, and in a couple more years could be a central leader on the team.

Filippo Ganna: While the main emphasis at Ineos is on stage racing, Ganna provides a reminder of the potential and power within other areas of the team. His progress in the last year has been nothing short of staggering, and at 24 he represents the present and future in time trialling.

The Italian has other strings to his bow, though, and his development, especially in the Classics, could be fascinating to watch over the next few years. Even though UAE Team Emirates have Pogačar in their ranks, they must surely look at Ganna’s progress and wonder how they let his talent slip through their fingers.

Michal Kwiatkowski: We could make this list a dozen riders long and still leave off some incredibly talented athletes, and there will no doubt be complaints for not giving Thomas, Sivakov or new signing Adam Yates more prominent billings, but Kwiatkowski gets the nod for the fact that he’s so accomplished in a variety of roles.

You could drop him into any race and he could perform a specific role. He can win Monuments, battle on the cobbles or the bergs, and then neatly slot into a position between the rouleurs and the climbers at the Tour de France. Kwiatkowski is one of the most complete riders in the peloton, and while his win-tally doesn’t do him justice, the quality of his victories speaks volumes.

Stage racing, if you really need to ask. Ineos has won the Tour de France every year bar two since 2012, while their domination has been built on mustering the best line-ups that money can buy before steamrolling over the opposition. It’s not necessarily the most appealing tactic, and it’s one of the several reasons why they’re so polarising in terms of appeal, but their record is streaks ahead of the competition.

The Giro d’Italia, however, was a reminder that the team can win with style, and their roster points to more aggressive racing in the next few years. The team also has arguably the two best time trialists in the world in Rohan Dennis and Filippo Ganna, with both riders sharing the last three time trial world titles between them.

Overall, this team is brimming with depth, and it’s not just Ineos’ experience that stands out, but also their recruitment of young riders. A couple of years ago, Pavel Sivakov and Tao Geoghegan Hart were the young kids on the block, while 2021 marks Tom Pidcock’s arrival at WorldTour level and continue the development of riders like Carlos Rodriguez and Ethan Hayter.

The Classics and sprinting. Apart from their initial roster and the presence of Elia Viviani, and, for a season, Mark Cavendish, this team has never really housed a pure out-and-out sprinter or given sprinting that much emphasis. Chris Lawless bobbed around for a couple of years, and Edvald Boasson Hagen was no slouch, but the team knows its strengths and knows not to dilute its main focus.

It’s also fair to say that the team has never indulged in a blue-chip Classics star beyond Michal Kwiatkowski and, at a push, Juan Antionio Flecha and Boasson Hagen. Instead, they’ve cultivated young talent with the hope of picking up Monument wins.

They’ve been far less successful in that department, but Ganna, Gianni Moscon, Dylan Van Baarle, Ben Swift and the newly acquired Pidcock have the potential to become something much better than was put forward this season.

Such a fuss was made when Jumbo-Visma signed Tom Dumoulin, but the response from Brailsford and his financial backer, Jim Ratcliffe, has been emphatic to say the least. Richie Porte, Adam Yates, Laurens de Plus and Daniel Martinez have all been brought in to add extra steel and flex to the stage-racing core, while Yates could also be a factor in races such as Liège-Bastogne-Liège, where he has finished in the top 10 on two occasions. It speaks volumes when a rider like Porte, who finished third in the Tour, is happy to sign for the team in full knowledge that he will ride as a super domestique.

Overall, this is the best-equipped stage-racing team in the world. There are some questions and doubts surrounding Bernal’s recovery and potential line-ups, but the team could select rosters for all three Grand Tours and conceivably dominate them all. Obviously, racing is never quite that predictable, and there will be a couple of interesting sub plots to follow next year.

Firstly, the team’s continued transition away from their old guard, with riders like Thomas approaching something close to the end of their peak, which could prove just as fascinating as Froome’s departure.

Secondly, it will be interesting to see whether the team genuinely wants to race with a more exciting and dynamic approach, or whether that was simply a product of how the Giro d’Italia unfolded. As we already know with this team, winning is winning, and that’s all that really matters.

Fulham vs Arsenal: Live Streaming, When And Where To Watch Live Telecast | Football News